I’ve always found that learning is one of the most amazing journeys in life. The biggest reason is that it’s a never-ending process.

Just when you think you know enough about something, a new bit of wisdom comes your way. It adds to what you already know and it enriches your life even more.

That’s how I felt recently about meditation. Mindfulness exercises (what meditation is mostly about) are something I like to practice as much as I can, daily if possible.

The act of sitting down and focusing your thoughts on nothing but the present moment helps quiet my mind.

This is especially useful for reducing stress and giving you peace of mind – which is why I’m a big fan of it.

Recently, I stumbled on a TED talk that offers another look at mindfulness and how you can use it in other ways.

Psychiatrist Judson Brewer talks about how habits start – be it good or bad – and how to use the power of mindfulness to break them.

He calls it “A simple way to break a bad habit” – check it out here:

He breaks down the step of developing a habit into three steps, which are: trigger, behavior, reward.

Now, you already know how this process goes, but on a subconscious level.

For example, the habit of eating starts with hunger. This is the natural urge to consume calories to live.

So, that urge triggers you to satisfy your hunger by indulging in a certain behavior, which is eating. And once you’ve acted out that behavior, you’re rewarded by different sensations.

That includes feeling sated, or full. So your mind learns to remember this pleasurable behavior and do the same thing in the future.

Most of the time, you’re not consciously aware of what’s going on. You keep repeating the cycle of habit because your brain likes to run to on auto-pilot.

This is fine when if it’s something positive, like grooming or working out. But other habits like smoking or overeating don’t add value to your life, and in fact, can shorten it.

So the most interesting part for me was to learn that the simple practice of mindfulness can help people break the behavior/reward cycle.

According to Judson, you can do this by heightening your awareness. He says we should be mindful of what’s happening to us while doing a habit (or feeling the urge to do it).

As he eloquently puts it, “Seeing clearly what we get when we get caught up in our behaviors, becoming disenchanted on a visceral level, and from this disenchanted stance, naturally letting go.”

This hit home for me. I knew mindfulness was a great practice, didn’t realize how much more useful it could be.

If I had known about this before, it would have been way easier for me to get over some nasty habits in my life, like watching too much TV.

But in any case, this was a nice discovery which adds another dimension to my personal meditation routine. The implication of this approach is that you don’t have to fight these urges head-on.

Instead of butting heads with your habit, there’s a better way to break the spell. You can break down your urges and simply observe how they make you feel.

That demystifies the whole cycle of addiction to bad habits. This is important because most people feel helpless against their urges.

And in turn, they seem terrifying to those who don’t see through the illusion of control these destructive behaviors have in our lives.

And when I dug deeper into the topic, I also learned there’s a thing called “urge surfing”.

As it happens, it also uses mindfulness to deal with bad habits. The idea is for you to “ride out” these urges until they subside and no longer feel them.

Like a surfer riding the waves, your goal is to go with the ebb and flow of your urges – not against it. This helps you stay on top instead of letting the waves consume you.

And like Judson says, being in controls starts with simply being aware of what’s going on in your body.

…you can control these urges – not the other way around.

So keep this in mind the next time you feel a bad habit of yours trying to keep you in its grasp. Avoid thoughts like, “I need to fight this urge.”

Focus on observing your feelings, nothing else.

Acknowledge those bodily sensations you’re experiencing. Think about what triggers your urges in the first place.

Then think about the guilt you feel and the negative consequences of that bad habit.

You can make a breakthrough by logically breaking down the trigger/behavior/reward cycle. Do this enough times, and it leads to disenchantment or disillusionment.

Suddenly, all those supposed benefits from your bad habits won’t seem so appealing to you anymore. And personal growth starts with these moments of heightened awareness and realization.

We could all use more moments like these because they can help us break out of the destructive patterns in our lives.

Not long ago, I felt burned out from all the stuff on my mind that was weighing me down. I would wake up in the morning and immediately feel that dread from having to deal with the day ahead.

I was overworked, deep in debt and relied on medication to deal with my anxiety. But I learned how to disrupt the negative behaviors that kept me in that dark place.

I was already practicing the Law of Attraction then, but I couldn’t get it to work for me for some reason. Then I came across a simple psychological technique.

This became the missing piece of the manifestation puzzle that was stumping me for the longest time.

You can find out how I did it here.

After making that key shift in my life, things were never the same again – and I mean that in a good way…

Yours in happiness and prosperity,

Use this 7 Day Mind And Soul Cleanse to declutter your life... in just 3 minutes per day! 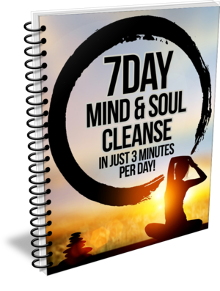